I knew the call was coming. All day there were reports of a large demonstration moving toward our hospital.  There had been significant looting with the previous night’s protests, and we expected that clashes would ensue between police, protestors and outside agitators.

We activated the command center around 4:00 pm.  I put on my scrubs and headed in from the west, judging my route by the position of the police and news helicopters in the distance.  The hospital parking lot was eerily quiet and as I walked in, there was a sense of anticipation…and readiness.

The nurses and staff in the center were assessing staffing and receiving reports of employees unable to get to the hospital due to street closures.  As I walked to the Emergency Department, it was already busy with acute surgical emergencies, heart attacks and elderly patients who had fallen, with fractures.  I was pleasantly surprised to see not one, but three chief residents there, along with a similar number of Trauma attendings.  Normally, we have one of each.  No one had to say anything, they just came in.

I made it a point to walk through the floors and the ICUs.  At the stations, the nurses were a bit surprised to see me there on a Saturday evening.  They expressed concern for their staff – both those coming in and leaving. One of them was on Facetime with a colleague caught in her car in the middle of a protest.  She was clearly terrified, but fortunately had her hospital ID and scrubs on.  She wasn’t injured and made it in.  By the same token, we hesitated to send one of our Fellows home.  He is African American and we had concerns about him being stopped.  We worked with a local hotel to provide housing for any employees who were concerned about their safety after completing their shift.  Some just asked to keep working and helping.

The Trauma pager went off.  A steady stream of injuries began to flow into the Emergency Department.  I watched as a multidisciplinary, multiracial team stabilized and evaluated the patients.  I knew some that were active in LGBTQ issues, others that had been discriminated against in their native countries, many for whom English was their second language.  They worked with a flow and beauty that seems at odds with one’s images of a trauma unit.

Three bays apart laid an LAPD officer and a protestor.  Both had been struck with projectiles – both would soon be in our operating room, having bleeding stopped and fractures repaired.  Both survived.

The surgical suites had a limited number of staff.  We coordinated and triaged, not just for injuries related to the protests, but also for other life-saving care.  A kidney would be arriving for a transplant around 1:00 am.   Another family was mourning the death of their loved one, yet had consented to organ donation – this too needed to be arranged, including safely bringing the transplant teams in from outside hospitals.

I walked into a case of a gunshot wound to the abdomen. The young trauma attending was working with our chief resident.  Her two fellow Chiefs were in the room providing support and being available to help with other cases.  The anesthesiologists were doing a masterful job keeping up with blood loss.  Once again, many genders, many races, many ages.  At 63, I was the oldest person in the room.  Gazing over the ether screen, I could appreciate the path of the bullet – have been there far too often.  We talked about other potential injuries and developed a plan to temporize and come back in a day for definitive treatment.  That patient, too, is alive and recovering.

My office is on the 8th floor, with a normally beautiful view of the Hollywood sign and the lights of the city.  Tonight, there was smoke in the air and the reflection of emergency vehicles on the windows below.

By 1:00 am the riots had burned themselves out.  A curfew was declared, and the streets began to quiet.  We felt it was safe to send some residents and attendings home to rest for the next day’s battle. I drove by broken glass and dumpsters in the street.

At 7:30 Sunday morning, we had a WebEx with other operational leaders.  In appropriate tones, we discussed security, staff morale and what we, as the appointed leaders, could do.

I smiled to myself – the true leaders that night didn’t have formal titles.  The were nurses, techs, residents, attendings, security and housekeepers.  They maintained equanimity in the face of chaos.  They did their jobs not because they were asked, but because it was in their hearts.

They are all of us. 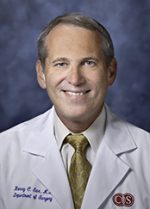